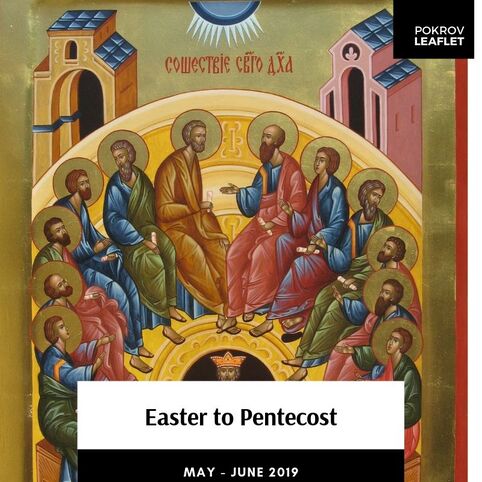 ​Easter Bright Week continues in the joyful spirit of the night of the Resurrection, with services being almost identical to it, including daily processions around the Church. On Bright Saturday after liturgy the Artos, a bread carried in processions representing Christ, the Bread of life is cut up and distributed to people in Church.

The next two Sundays are dedicated to the events surrounding the Resurrection of Christ: St Thomas Sunday and the Sunday of the Myrrhbearers when Joseph of Arimathea and Nicodemus are also remembered. The apostle Thomas shows us that anyone who seeks faith sincerely will not be denied the opportunity to touch Christ, even if it is in a figurative way. The women who came to anoint the body of Christ early on Sunday morning – and the two men, members of the Supreme Council of Israel teach us that love of Christ in the spirit of humility gives strength to overcome fear and enable us to do the seemingly impossible. These two themes continue in the history of the saints and the people of New Israel, the Church.

A number of liturgical cycles begin with Easter: the lectionary of daily scriptural readings, the changing of weekly “tones” (1- 8) with material for each day of the week for Sunday multiplied by eight repeating cycles, and the cycle of eleven Resurrection Gospel readings for Sunday matins. The latter are read at vigils on Saturday nights. This way the Orthodox Church emphasises the centrality of the Resurrection throughout the whole year. Every Sunday celebrates the Resurrection of Christ. It is a weekly Pascha that is connected not only thematically, but also structurally to the central event of the Christian year. Christ appears to His disciples many times in the days leading up to the Ascension and we are given a sense of this during these forty days, as well as on Sundays for the rest of the year.

Those who are conscious of the flow of the liturgical year will notice that themes ‘fade in’ and ‘fade out’. From fourth Sunday, the theme of ‘water’ is introduced. That of course is connected to baptism and the life in the Holy Spirit beginning from Pentecost. St John the Baptist said that he baptised with water, but the Messiah would baptise with the Holly Spirit and fire, of which we will mention later. Thus fourth Sunday gives the story of the paralytic at the pool of Bethesda, healed by Christ, the fifth Sunday we have the story of Christ’s conversation with the Samaritan woman at the well, the sixth Sunday – a man who was born blind is sent to Siloam spring to wash off the mud with which the Lord had anointed his unseeing eyes. What a graphic way to tell us what blocks our spiritual vision! The Lord spits on the ground to make his ointment; He spits on our attachment to the earth, to material things. The former blind man becomes a fearless confessor of Christ. On Wednesday following the last Sunday of Easter we give up the feast with services similar to Bright Week.

The feast of Holy Ascension presents a challenge for us to understand the joy of the Lord’s disciples as they walked down from the Mount of Olives. He said to them at the Mystical Supper that it would be better for them that He should leave, because then He would send the Holy Spirit, the Comforter from the Father. Christ’s presence on Earth after the Resurrection revealed His divinity that was suppressed from the eyes of people before. Nevertheless, He appeared not only to His disciples, but also to more than five hundred people in Galilee assembled in one spot, obviously people who had known Him before (1 Cor. 15:6). Our God is not the God of power, but the God of meekness and humility. This is shown not only in the story of the Saviour, but even hundreds of years before His coming in the story of Elijah (4 Kingdoms 19: 11-12). Christ’s appearance in power can only happen in His Second Coming, otherwise He would have forced the whole world to recognise Him. God gives freedom – and responsibility for our life. Thus, we become His co-workers in the life of the Church. He gives us eternal life and great mercy, we hear in the Sunday services. Eternal life begins here and its spring is in the Eucharist. Great mercy is in His invitation to come to the table with the Father, the Son and the Holy Spirit as is depicted in the great Icon of St Andrei Rublev. The Ascension speaks of the continuation of our Pascha of the Eucharist in Heaven, in a more direct way, as St John of Damascus writes in the 9th ode of the Paschal Canon.

Pentecost is a theophany, a manifestation of the Triune God and so it is called the feast of the Holy Trinity. The beginning of the book of Acts of the Apostles describes the actual event of the descent of the Holy Spirit on the feast of the Old Testament Pentecost. Then Moses received the Law, here the Church receives grace. Grace is not just a gift of God, but God Himself in His energies as the Fathers explain. Through the grace of the Holy Spirit sent by the Son from the Father, we become “alive to God in Christ Jesus our Lord” (Rom. 6:11). Christ is our Connector to the Father because of His humanity. This connection enables us to partake of real life, not mortal and meaningless existence. In the kneeling prayers of Pentecost vespers, we hear the Church praying for everyone, even the souls in hell. God is love and desires life for everyone. However, the New Testament and the tradition of the Church make it clear that this is possible only through our involvement and effort in becoming “dead indeed to sin” (Rom. 6:11). Then we are preparing ourselves to receive the fire that engulfed the Church two thousand years ago. The Lord wishes that the fire would be kindled in us, too (Lk. 12:49).