THE ASCENSION OF OUR LORD
​
HOLY PENTECOST

THE ASCENSION OF OUR LORD JESUS CHRIST
(40th Day after Pascha)

On the 39th day after Pascha, we celebrate the Leavetaking of the Feast of Feasts, commemorating the last day of the Risen Christ’s earthly sojourn. The day following is celebrated as His Leavetaking – His Glorious Ascension into Heaven. As Holy Scripture tells us, after Jesus had spoken with His disciples on the Mount of Olives, concerning the coming of the Holy Spirit, as they were looking on, He was lifted up, and a cloud took Him out of their sight. And while they were gazing into heaven as He went, behold, two men stood by them in white robes, and said, “Men of Galilee, why do you stand looking into heaven? This Jesus, Who was taken up from you into heaven, will come in the same way as you saw Him go into heaven.” Then they returned to Jerusalem from the mount called Olivet, which in near Jerusalem, a Sabbath day’s journey away (Acts 1:9-12).

The Lord ascended to Heaven not to sadden us with His departure, but in order to do what was best for us. It is to your advantage that I go away, He had told His disciples. [For] if I do not go away, the Comforter will not come to you (John 16:7). I will pray the Father, and He will give you another Comforter, to be with you for ever, even the Spirit of truth… The Comforter, the Holy Spirit, Whom the Father will send in My name, He will teach you all things (John 14:16, 26). The Savior saw that His mission on earth was accomplished. The goal of His Incarnation was to proclaim the Divine Truth to the world, to direct men onto the path of repentance and salvation, and deliver us from Eternal Death. The Lord accomplished our salvation and man acquires it through the action of the Holy Spirit.

The Lord knew the trials and tribulations that would be endured by His disciples – mockings, scourgings, imprisonment and even death. And thus, the Lord ascended to His Heavenly Father that the Spirit might descend from the Father as the Comforter, and fortify His Friends.

The Lord ascended to Heaven in order to prepare for us, too, the path to the Heavenly Mansions, to open the Gates of Paradise, and Himself to be our Guide. Heaven that had been closed to men before the Resurrection now at the Ascension was opened by Christ the Saviour.

None of the righteous men of the Old Testament – the Patriarchs, the Prophets, and men pleasing to God could enter Heaven. No one has ascended into heaven but He Who descended from heaven, the Son of man (John 3:13), the Lord had said. Our first parent, Adam, closed the Gates of Paradise, and an angel with a flaming sword was placed at the gates. But the New Adam, Our Lord Jesus Christ, through His Ascension, opened the way to Life and Heaven itself. He was followed by the souls of the Holy Forefathers, Prophets and hosts of righteous people of the New Testament. All worthy Christians who follow in the footsteps of their Saviour, enter Heaven in this way today and so they will in the future.

The Lord ascended to intercede for us with His Heavenly Father. Towards the end of His earthly mission, He had said: I go to prepare a place for you. And when I go and prepare a place for you, I will come again and will take you to Myself, that where I am you may be also (John 14:2-3). This same thought was also expressed by the great Preacher of Christ’s teaching, St. Paul, in the Epistle to the Hebrews: Christ has entered, not into a sanctuary made with hands, a copy of the true one, but into heaven itself, now to appear in the presence of God on our behalf (Heb. 9:24). These words fill us with hope, for we now have in Heaven a great Mediator and Advocate for the world with God – Christ Our Lord.

Our Lord ascended in a cloud on high, symbolizing the rising smoke of an acceptable sacrifice. Thus the sacrifice was accepted by God and Christ the Lamb that was slain is ushered into the preserve of God where He will be eternally offered in the Holy Eucharist. Therefore, we must be worthy of the great mercies of God, capable and ready to receive them. All the power, all the fruit of His divine Ascension, therefore, belong to us, for when He ascended on High, He led captivity captive, and gave gifts to men (Eph, 4:8). This is why the Church repeatedly proclaims; “clap your hands, all you nations, for Christ is ascended up to the place where He was before” [from the Vespers of the Feast].
Troparion of the Feast (Tone 4)
O Christ God, Thou hast ascended in Glory, granting joy to Thy disciples by the promise of the Holy Spirit. Through the blessing they were assured that Thou art the Son of God, the Redeemer of the world!

Kontakion of the Feast (Tone 6)
When Thou didst fulfil the dispensation for our sake, and unite earth to heaven: Thou didst ascend in glory, O Christ our God, not being parted from those who love thee, but remaining with them and crying: I am with you and no one will be against you! 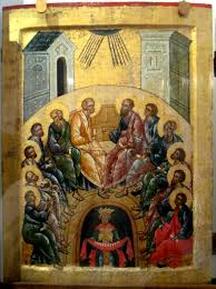 THE DESCENT OF THE HOLY SPIRIT
(50th Day after Pascha)

On the 50th Day after Pascha, the Holy Church celebrates the Feast of the Descent of the Holy Spirit (Holy Pentecost). When the Day of Pentecost had come, they were all together in one place. And suddenly a sound came from heaven like the rush of a mighty wind, and it filled all the house where they were sitting. And there appeared to them tongues as of fire, distributed and resting on each one of them. And they were all filled with the Holy Spirit and began to speak in other tongues, as the Spirit gave them utterance (Acts 2:1-4).

In His farewell discourses to His disciples, the Lord told them, I will pray the Father, and He will give you another Comforter, to be with you for ever, even the Spirit of Truth, Whom the world cannot receive, because it neither sees Him nor knows Him; you know Him. For He dwells with you, and will be in you… [The] Comforter, the Holy Spirit, Whom the Father will send in My name, He will teach you all things… (John 14:16-17, 26). These words of the Lord were accomplished on the 50th Day after the Passover (Pascha), for the Seal of the Holy Spirit was seen on the Apostles in the form of fiery tongues, just as, in Holy Chrismation, we receive the Seal of the Holy Spirit in the form of the Holy Chrism.

The people who were present were greatly amazed at the sight, and especially that each one of them, no matter what nationality, heard the Apostles speaking to them in their own language. But others mocking said, “They are filled with new wine” (Acts 2:13).

Then Peter got up and spoke to them: Men of Judea and all who dwell in Jerusalem, let this be known to you, and give ear to my words. For these men are not drunk, as you suppose, since it in only the third hour of the day; but his is what was spoken by the prophet Joel: “And in the last days it shall be, God declares, that I will pour out My Spirit upon all flesh, and you sons and you daughters shall prophesy, and your young men shall see visions, and your old men shall dream dreams, yea, and on My menservants and My maidservants in those days I will pour out My Spirit; and they shall prophesy. And I will show wonders in the heaven above and signs on the earth beneath, blood, and fire, and vapour of smoke; the sun shall be turned into darkness and the moon into blood, before the day of the Lord comes, the great and manifest day. And it shall be that whoever calls on the name of the Lord shall be saved” (Acts 2:14-21).

Peter went on to speak of the Risen Christ and His redemptive acts, reminding them that this Jesus God raised up, and of that… all [of the Apostles were] witnesses (Acts 2:32). He continued: Being therefore exalted at the right hand of God, and having received from the Father the promise of the Holy Spirit, He has poured out this which you see and hear (Acts 2:33).

Many of those hearing were cut to the heart, and said to Peter and the rest of the Apostles, “Brethren, what shall we do?” And Peter said to them, “Repent, and be baptized every one of you in the name of Jesus Christ for the forgiveness of your sins; and you shall receive the gift of the Holy Spirit…” So those who received his word were baptized, and there were added that day about three thousand souls (Acts 2:37-38, 41).

A special characteristic of this day is the singing of the Stichera to the Holy Spirit: “O Heavenly King, the Comforter, the Spirit of Truth, Who art everywhere present and fillest all things, Treasury of Blessings and Giver of Life: Come and abide in us and cleanse us from every impurity, and save our souls, O Good One!” In addition, seven Kneeling Prayers are read by the priest during the vespers which immediately follow the Divine Liturgy of the day, while everyone are on bended knees, this being the first time kneeling is permitted since Holy Pascha.
Troparion of the Feast (Tone 8)
Blessed art Thou, O Christ our God, Who hast revealed the fishermen as most wise by sending down upon them the Holy Spirit; through them thou didst draw the world into Thy net. O Lover of Man, Glory to Thee!

Kontakion of the Feast (Tone 8)
When the Most High came down and confused the tongues, He divided the nations, but when He distributed the tongues of fire, He called all to unity. Therefore, with one voice, we glorify the All-Holy Spirit!