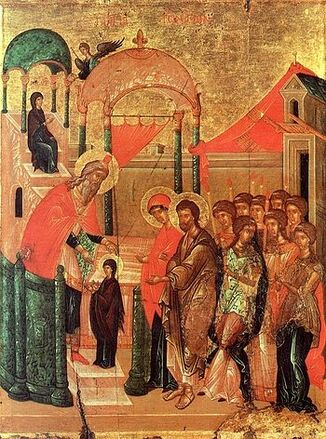 ​  THE ENTRY INTO THE TEMPLE OF THE MOST HOLY MOTHER OF GOD
21 Nov/4 Dec
When the most holy Virgin Mary had reached the age of three, her parents, holy Joachim and Anna, took her from Nazareth to Jerusalem, to give her to the service of God in fulfilment of their promise. It was three days’ journey to Jerusalem, but, going as they were on God’s work, they did not find the journey difficult. Many of Joachim and Anna’s kinsmen gathered to take part in this celebration, in which the invisible angels of God also took part. Maidens went ahead with lighted candles in their hands, followed by the most holy Virgin, led on either side by her father and mother. The Virgin was clad in royal and beautiful garments, like those of the “king’s daughter”, the Bride of God (Ps. 44:9-10). Behind them walked many of their kinsfolk and friends, all bearing lighted candles. There were fifteen steps leading to the Temple. Her parents stood the Virgin on the first step, and she ran quickly to the top on her own, where the High Priest, Zacharias, the father of St John the Forerunner, met her and, taking her by the hand, led her not only into the Temple but into the Holy of Holies, the holiest place of all, into which none could enter except the High Priest, and that once a year. St Theophylact of Ochrid says that Zacharias was “out of himself, and moved by God’ when he led the Virgin into the chief place in the Temple, beyond the second curtain – otherwise there could be no explanation of his action. Her parents then offered sacrifices to God, according to the Law, received the priest’s blessing and returned home, leaving the most holy Virgin in the Temple. She dwelt in the Temple for nine whole years. While her parents were alive, they visited her often. When they departed this life, the holy Virgin was left an orphan, and longed to remain in the Temple for the rest of her days, without entering into marriage.  This being contrary both to the Law and Israelite custom, she was confided at the age of twelve to St Joseph, a kinsman of hers in Nazareth, so that she might, under the protection of betrothal, live in virginity and thus fulfil both her desire and the demands of the Law, for it was unknown in Israel at the time for a girl to vow perpetual virginity. The holy Virgin Mary was the first to do this, and was later followed by thousand upon thousand of virgin men and women in the Church of Christ.


THE HOLY AND GREAT MARTYR BARBARA
4/17 Dec
This famous follower of Christ was betrothed to Him from her early years. Her father, Dioscorus, was a pagan in the city of Heliopolis in Egypt, and was famed for her wealth and standing. Dioscorus shut up his only daughter, who was both intelligent and beautiful, in a high tower, surrounded her with all possible comforts, gave her a host of attendants, set up idols for worship and built her a bathroom with two windows. As she gazed through the windows of the tower upon the earth below and the starry sky above, Barbara’s mind was opened by the grace of God, and she came to know Him as the one, true God and Creator, although she had no human teacher to bring her to the knowledge of Him.

Once, when her father was away from the city, she came out of the tower and, by God’s providence, met some Christians who told her about the true Christian faith. Barbara’s heart was set on fire with love for Christ. She had a third window cut in the bathroom as a symbol of the Holy Trinity, and traced a Cross with her finger on one wall of it, which etched itself deep in the stone as if cut by a chisel. A spring of water gushed forth from the bathroom floor from her footprint, and it later gave healing from sickness to many. When Dioscorus found out about his daughter’s faith, he beat her harshly and drove her from the tower, chasing after her to kill her, but a cliff opened and hid Barbara from her irate father. When she appeared again, Dioscorus took her to Marcian, the governor of the city, who handed her over for torture. The innocent Barbara was stripped and beaten until her entire body was covered in bloody wounds, but the Lord Himself appeared to her in the prison with many angels, and healed her. A certain woman, Juliana, beheld this and conceived a desire for martyrdom herself. Both of them were fearfully tortured and taken around the city to be mocked, then their breasts were cut off and much blood flowed from them. They were finally led out to the place of execution, and Juliana was slain by soldiers while Barbara was killed by her own father. On the same day, lightning struck Dioscorus’s house, killing both him and Marcian.

St Barbara suffered in 306, and her wonderworking relics are preserved in Kiev. Greatly glorified in the Kingdom of Christ, she has appeared many times down to our own days, sometimes alone and sometimes in the company of the most holy Mother of God.

ST JOHN DAMASCENE
4/17 Dec
He was first a minister of Caliph Abdul-Malek, and then became a monk in the monastery of St Sava the Sanctified. For his ardent advocacy of the veneration of icons while still a courtier during the reign of the iconoclast Emperor Leo the Isaurian, he was slandered by the Emperor to the Caliph, who had his right hand cut off. John fell down in prayer before the icon of the most holy Mother of God, and his hand was re-joined to his arm and miraculously healed. When he beheld this wonder, the Caliph repented, but John no longer desired to remain at court as a nobleman, but to withdraw to a monastery. There, he was from the beginning a model of humility and obedience, and of all the works of asceticism prescribed for monks. He wrote the hymns of the parting of the Soul from the Body, put together the Octoechos, the Irmologion, the Menologion and the Easter Canon, and wrote many theological works of an inspired profundity. A great monk, hymnographer and theologian, and a great warrior for the truth of Christ, Damascene is counted among the great Fathers of the Church. He entered peacefully into rest in about 749, being seventy-five years old.

ST NICHOLAS THE WONDERWORKER, ARCHBISHOP OF MYRA IN LYCIA
6/19 Dec
This saint, famed throughout the entire world today, was the only son of his eminent and wealthy parents, Theophanes and Nona, citizens of Patara in Lycia. They dedicated to God the only son He gave them. St Nicholas was instructed in the spiritual life by his uncle Nicholas, Bishop of Patara, and became a monk at “New Sion”, a monastery founded by his uncle. On the death of his parents, Nicholas distributed all the property he inherited to the poor and kept nothing back for himself. As a priest in Patara, he was known for his charitable works, fulfilling the Lord’s words: “Let not thy left hand know what thy right hand doeth” (Matt. 6:3). When he embraced a life of solitude and silence, thinking to live in that way until his death, a voice from on high came to him: “Nicholas, set about your work among the people if you desire to receive a crown from Me”. Immediately after that, by God’s wondrous providence, he was chosen as archbishop of the city of Myra in Lycia. Merciful, wise and fearless, Nicholas was a true shepherd to his flock. He was cast into prison during the persecutions of Diocletian and Maximian, but even there continued to instruct the people in the Law to God. He was present at the First Ecumenical Council in Nicaea in 325, and, in his zeal, struck Arius with his hand. For this act, he was removed from the Council and from his episcopal duties, until some of the chief hierarchs had a vision of our Lord Christ and His most holy Mother showing their sympathy with Nicholas.

This wonderful saint was a defender of the truth of God, and was ever a spirited champion of justice among the people. On two occasions, he saved three men from underserved sentences of death. Merciful, trustworthy and loving, he walked among the people like an angel of God. People considered him a saint even during his lifetime, and invoked his aid when in torment or distress. He would appear both in dreams and is reality to those who called upon him for help, responding speedily to them, whether close at hand or far away. His face would shine with light as Moses’ did aforetime, and his mere presence among people would bring solace, peace and goodwill.

In old age, he sickened of a light illness, and went to his rest in the Lord after a life full of labour and fruitful toil. He now enjoys eternal happiness in the Kingdom of heaven, continuing to help the faithful on earth by his miracles, and to spread the glory of God. He entered into rest on December 6th, 343.


(Adapted from “The Prologue from Ochrid”, Vol.4)