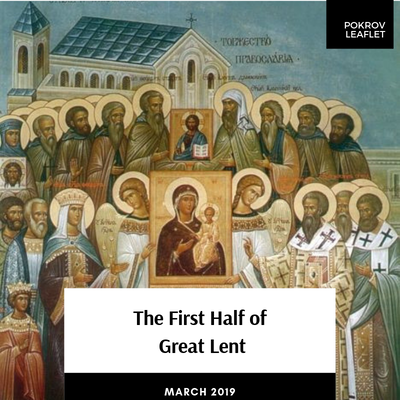 Great Lent is perceived as the annual climb up the mountain of spiritual effort. The Tree of the Cross at the top of the mountain is a reminder of the purpose and content of our journey. We are heading towards the Pascha of the Cross and the Resurrection – to participate in the life of Christ.

The first week of Lent is of crucial importance. It is said that how a person spends that week in a given year will determine how the rest of Lent is spent – and even a whole year until the next year’s Lent. Those who are able to come for the morning services experience the unhurried pace of Lent which tells us to slow down and look at ourselves, look at our heart. The prayer of St Ephraim intones regularly, rhythmically like a bell: “O Lord and Master of my life …” We pray to God to enable us to see what is inside, to change our mind and heart to a clarity of vision that makes us aware that we should not be worrying about other people’s failings, but our own. The evening is filled with Great compline, which begins – from Monday to Thursday – with the reading of a quarter of the Great canon of St Andrew of Crete; a song of repentance sung to our soul in the images of the Bible. In our parish practice we read excerpts from the ascetic Fathers who teach us how to struggle with our inner problems; problems caused by the illness of the soul since Adam.

The first Sunday of Lent is called ‘Sunday of Orthodoxy’. When the last iconoclastic Emperor (Theophilus) died, his widow Theodora ruled until their son Michael was old enough to take over. In 842 with Patriarch Methodius, the clergy and people, she restored icon veneration. The Icon is important as a statement of our faith in the Word becoming flesh. The Lord Jesus Christ is the visible Image of the invisible God: “Who has seen Me, has seen the Father” (Jn 14:9). On this day each year the Church affirms in a powerful way that faith and life are inseparable. What we believe directs our life; how we live either strengthens or weakens our faith, our ability to feel the reality of Christ’s Kingdom of Heaven.

Lent is seen as an annual tithe to God (one tenth of each year).  It was practiced by the earliest Christians in imitation of the Lord, Who fasted for forty days after His baptism in the Jordan. Lent is seen as an image of our life of wandering, like Israel under Moses until we come to Promised Land, the Pascha of the Lamb of God, the wedding feast of the King’s Son.

The second Sunday of Lent the Church remembers St Gregory Palamas, a holy hierarch of the 14th century. The Sunday of Orthodoxy sums up the essence and history of our faith. The second Sunday can be called the triumph of Orthodox life. The Church was born on the day of Pentecost, an outpouring of the Holy Spirit from the Father, through the Son. St Gregory summed up and clarified the ancient Christian experience of life in the Holy Spirit. The grace of the Holy Spirit is not an impersonal power or gift from a distant God. It is personal communion with God Himself that makes Christ present in the life of the Church. “Christ is in our midst! He is, and shall be!”. This ancient greeting, the Eucharistic kiss of peace is a joyous confession not only of faith, but also of life in the Church.

The early Christians practiced frequent communion. The deacon’s exclamation: “The doors! The doors!” is a reminder that all those who remained after the unbaptised catechumens left and the doors were locked, participated in the Eucharist, received Holy Communion. The Eucharist, consecration of the Holy Gifts is a joyous event, an experience of Pascha. For that reason, the Church from the earliest times did not celebrate the Eucharistic liturgy during weekdays of Great Lent. They received Holy Gifts that were consecrated on Sundays. In the 6th century St Gregory, the Pope of Rome gave a structure to the liturgy of Presanctified Gifts, which is normally served on Wednesdays and Fridays and occasionally other weekdays in Lent and Passion Week. It is basically a Vespers service with added elements such as the singing of characteristic hymns and borrowings from the Eucharistic liturgy.

The first Saturday of Lent is dedicated to the memory of St Theodore the Recruit who appeared to the Archbishop of Constantinople to warn him about Julian the Apostate’s plot to defile Christians by sprinkling food at the market with blood from pagan sacrifices. “Kolivo” (a Slavic word for boiled wheat) was mentioned by the martyr in his dream appearance. The next four Saturdays we commemorate the dead, who are also remembered during weekdays at litys.
​
Finally, we reach the Sunday of the Holy Cross when it is brought out at the end of matins service – the night before in the practice of the Russian Church. As we venerate the Cross making prostrations before it we worship the Lord, His Passion, death and Resurrection. The Cross is kept in the middle of the Church to encourage the faithful in their further Lenten efforts and journey to Pascha. On Wednesday of fourth week special petitions are added at the liturgy of Presanctified Gifts for catechumens, people preparing for baptism, who were traditionally received into the Church on Lazarus Saturday and Great Saturday before Easter. This is a reminder for the faithful also to contemplate the mystery of the life in Christ that begins in baptism: the mystery of dying to sin and rising with Christ.