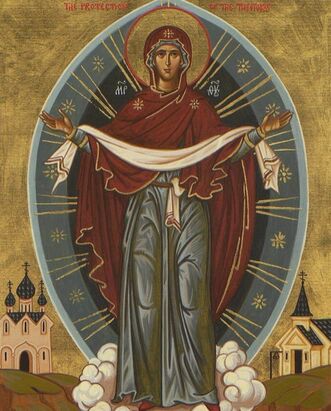 The Church has always glorified the most holy Mother of God as the Protectress and Defender of the Christian people, entreating, by her intercession, God’s loving-kindness towards us sinners. The Mother of God’s aid has been clearly shown times without number, both to individuals and to peoples, both in peace and in war, both in monastic deserts and in crowded cities.

The event that the Church commemorates and celebrates today proves this constant protection of the Christian people by the Mother of God. On October 1st, 911, in the time of the Emperor Leo the Wise (or the Philosopher), there was an all-night vigil at the Blachernae church of the Mother of God in Constantinople. The church was crowded. St Andrew the Fool for Christ was standing at the back of the church with his disciple Epiphanius. At four o’clock in the morning, the most holy Mother of God appeared above the people with a veil spread over her outstretched hands, as though to protect them with this covering. She was clad in gold-encrusted purple and shone with an unspeakable radiance, surrounded by apostles, saints, martyrs and virgins. Seeing this vision, St Andrew gestured towards it and asked Epiphanius: “Do you see how the Queen and Lady of all is praying for the whole world?” Epiphanius replied: “Yes, Father, I see it and stand in dread.” As a result, this commemoration was instituted to remind us both of this event and of the Mother of God’s constant protection whenever we prayerfully seek that protection, that shelter, in distress.

Born in the Syrian town of Emesa, he served as a verger first in Beirut and then in Constantinople at the cathedral, in the time of Patriarch Euphemius (490-96). Illiterate and with no musical training, he was despised by certain educated clergy. St Romanus prayed weeping to the Mother of God, and she appeared to him in a dream, held a piece of paper out to him and told him to swallow it. The following day was Christmas Day, and Romanus went up to the ambo and with an angelic voice, sang: “Today the Virgin …”, which has come down to us as the Kontakion of the Feast. All marvelled at the words of the hymn and at the singer’s voice. Receiving thus the gift of song from the Mother of God, Romanus composed more than a thousand kontakia. He died as a deacon the Great Church in Constantinople in 530, and went to join the angelic choir.

By birth a Slav, he was bought as a slave by Theognostus, a rich man in Constantinople, in the time of the Emperor Leo the Wise, son of the Emperor Basil the Macedonian. Andrew was a handsome young man, both in body and soul. Theognostus liked him and allowed him to learn to read and write. Andrew prayed fervently to God and attended church services with great devotion, and, in obedience to a heavenly revelation, resolved on the ascesis of folly for Christ’s sake. Once, when he went to the well for water, he cast off his clothes and cut them to pieces, feigning madness. Saddened by this his owner Theognostus put him in chains and took him to the church of St Anastasia the Deliverer from Bonds, that prayers be read for him. But, as Andrew did not recover as far as his owner could see, he was freed as being sick in mind. Holy Andrew feigned madness all day and spent the nights in prayer. He lived without a roof over his head, spending the nights in the open and going about half-naked in a single, tattered garment and eating a little bread when kindly people shared theirs with him. Whatever he received, he gave away to beggars, and when he gave it to them, he would mock them to avoid their thanks, for holy Andrew looked only for the reward from God. Therefore great grace from God abode in him, and he was able to discern men’s secrets, see angels and demons, drive demons from men and turn men from sin. He had a most wonderful vision of Paradise and the exalted powers of heaven; he saw the Lord Christ on His throne of glory; he, with his disciple Epiphanius, saw the most holy Mother of God in the Blachernae church, sheltering the Christian people with her veil (see Oct.1st); he heard in heaven unspeakable words, which he dared not recount to men.
After unprecedentedly harsh asceticism, he entered into rest and the eternal glory of his Lord in 911.


(Adapted from “The Prologue from Ochrid”, Vol.4)