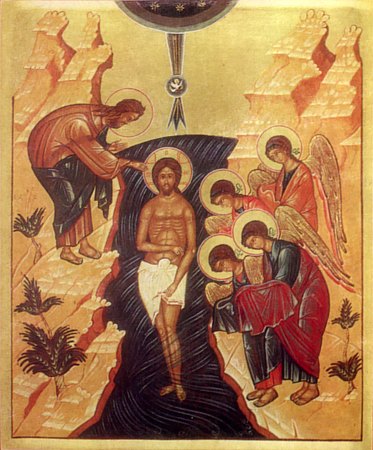 ​The services of this feast celebrate the event of Christ’s baptism described by the first three Evangelists and mentioned by John. It is called Theophany because the Holy Trinity was manifest in the voice of God the Father, witnessing His Son; the Son’s baptism in the Jordan River by the Baptist John; the appearance of the Holy Spirit above the Son. Thus the troparion (main hymn of the feast declares:
“When Thou, O Lord, wast baptised in the Jordan, the worship of the Trinity was made manifest. For the voice of the Father bore witness unto Thee, calling Thee the beloved Son, and the Sprit in the form of a dove confirmed His word as sure and steadfast. O Christ our God , Who hast appeared and enlightened the world, glory to Thee”

According to St Athanasius the Great, St John Chrysostom and others the Holy Spirit was always with Christ, but His appearance at the Baptism showed to John the Baptist that Jesus was the Christ (Jn 1:32-34). Thus He could witness to the people of Israel with authority to follow Him.

From ancient times the feast is also called the Day of Enlightenment and the Feast of Lights because God is light and appeared to enlighten those “sitting in darkness and the shadow of death” (Matt. 4:16). The early Church had the custom of baptising catechumens on the Eve of the feast. This event of spiritual enlightenment was accompanied by the lighting of many lamps and candles.

The early Church remembered in this feast other events which signified the Divinity of Christ and His mission to the world both in His birth and the beginning of His ministry after the Baptism. For instance, the adoration of the Magi was remembered as Christ’s Epiphany to the nations. In the West the feast acquired the name “The feast of three Kings”.

Theophany as a liturgical celebration goes back to the earliest times of Church history. It is mentioned in “The Apostolic Constitutions”, St Clement of Alexandria, St Hippolytus and St Gregory the Wonderworker, as well as many of the Fathers of IV-VI centuries. The service material of the feast contains elements from the fifth to the ninth centuries with authors such as: Anatole of Constantinople (V century): Andrew and Sophronios of Jerusalem (VII century); Cosma Maiumas, John of Damascus, Germanos of Constantinople (VIII century); Joseph of Studium, Theophanos and Byzantios.

St John of Damascus teaches that the Lord accepted baptism not because He needed purification, but to accept our purification, “to drown the sin of mankind; to fulfil the law; to manifest the Holy Trinity and finally to sanctify the waters and give us an example” in getting baptised.

Thus the Church, celebrating the feast of the Lord’s Baptism affirms our faith in the unspeakable mystery of the Three Persons of one Godhead. The Church rejects the delusions of the ancient heretics who either denied the Trinitarian theology or called the humanity of Christ a mirage.

The Church stresses the necessity of baptism for our salvation, showing that our purification and salvation from sin is possible only through the grace of the Holy Spirit. The feast inspires us to fill our hearts with boundless gratitude to the One Who purified and enlightened our sinful nature. We are called to use the gifts of grace received in baptism and to preserve the purity of the precious role of righteousness of which we are reminded in the liturgy of the feast: “As many as have been baptised into Christ have put on Christ” (Gal. 3:27).

The services of Theophany are very similar to the services of Nativity (Christmas) with the royal hours, liturgy and vespers of the eve of the feast leading up to a vigil consisting of the great compline and matins. There is a great blessing of water done twice: on 5(18) January and on 6 (19) January. This rite came from the custom of baptising catechumens on the eve of the feast and was, until XI-XII centuries performed once on 5 (18) January. However, the custom of the Church of Jerusalem to bless the waters again after the festal liturgy gradually spread to the whole Church. It is easy to see that the prayer for the blessing of water is a reworked prayer from the service of baptism. There is a custom (whenever possible) to walk in procession with the Cross, Gospel, candles and banners to a river or a lake in memory of Christ’s baptism and to perform the rite of blessing there.