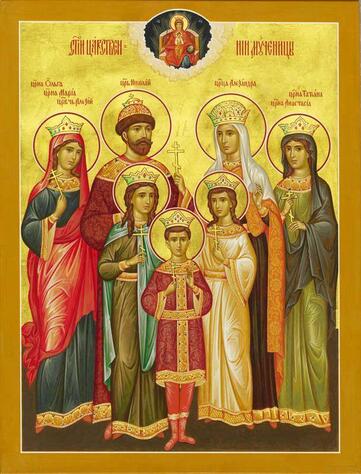 4/17 July
The Royal Martyrs of Russia
This year the Russian Church commemorated the Centenary of the Martyrdom of Tsar Nicholas, his wife Queen Alexandra, children: Olga, Tatiana, Maria, Anastasia, Prince Aleksei; and their servants, as well as Grand Duchess Elizabeth, nun Barbara and several members of the Royal family killed in Alapayevsk on the following day. Some of the bishops of the Church Abroad including our Bishop George participated in these events in Urals.


4/17 July
Our Holy Father Isaiah the Solitary
He lived in asceticism at Scetis in Egypt and then in Palestine, dying in Gaza in about 491. He is mentioned in Barsanuphius and John’s book as a man of outstanding holiness (Answers: 240, 252, 311, etc.). He wrote much that was instructive for monks and solitaries, but few of his writings are extant, the majority having been destroyed by Moslems. St Isaiah said: “The mind, before it awakens from the sleep of laziness, is with the demons”. “The crown of all good works consists in this: that a man place all his hope in God, that he flee to Him once and for all with all his heart and strength, that he be filled with compassion for all and weep before God, imploring His help and mercy”. What is the sign that a man’s sin is forgiven? “The sign that a sin is forgiven is that the sin has no further action in your heart, and that you have so utterly forgotten it that, in speaking of such a sin, you feel no inclination to it but regard it as something totally outside you. That is the sign that you are forgiven”. Prayer and asceticism are useless to a man who conceals within himself malice toward his neighbour and the desire for revenge. “Watch with all your strength that your mouth does not speak one thing and your heart contain something quite different”. “The crown of good works in love; the crown of the passions is the justifying of one’s sins”.

11/24 July
St Olga (Elena)
A great Russian princess, the wife of Prince Igor, she was called Olga before her baptism. She was baptised in Constantinople by Patriarch Polyeuctus, and was greatly zealous for the Orthodox faith in Russia. She entered into rest in 969.


15/28 July
The Holy Martyrs Cerycus (Kyrikos) and Julitta
Holy Julitta was of noble birth. She was widowed young, and left with a newborn child, Cerycus. She lived in Iconium, a city of Lycaonia, and was a very devout Christian. She had her son baptised immediately after his birth and, when he was three years old, instructed him in the faith and taught him to pray insofar as a child of that age is capable of learning. When Diocletian launched a persecution of Christians, much innocent blood was shed in the city of Iconium. Julitta took her son and hid from the wrath of the pagans in the town of Seleucid, but things were no better there. Julitta was arrested as a Christian and brought to trial. Seeing Julitta so courageously proclaim her faith in the Lord Jesus, the judge, to distress her and make her waver, took the child in his arms and began to kiss it. But Cerycus shouted: “I am Christian; let me go to my mother!”, and he began to scratch the judge, turning his face away from him. The judge was furious, threw the child to the ground and kicked it, and the child rolled down the stone steps and gave his holy and innocent soul to God. Seeing how Cerycus suffered before her, Julitta was filled with joy and gave thanks to God that her son had been counted worthy of the wreath of martyrdom. After harsh torture, Julitta was beheaded, in the year 304. The relics of Sts Cerycus and Julitta have wonderworking power to this day. A part of the relics of these saints is to be found in Ochrid, in the Church of the Holy Mother of God, the Healer.

15/28 July
St Vladimir, Great Prince of Russia
Vladimir was the son of Prince Svyatoslav, and grandson of Igor and Olga, and was at first completely pagan in faith and life. Learning of the existence of various faiths, he began to examine them, to decide which was best. He therefore sent envoys to Constantinople. When they returned, they told the Prince that they had been at a service in the Orthodox Church of St Sophia. (We were) “out of ourselves, not knowing if we were on earth or in heaven”. This inspired Vladimir to be baptised, receiving the name Vasily, and to baptise his people. The chief idol, Perun was dragged off the hill of Kiev and thrown into the Dnieper. Embracing the Christian faith, Vladimir utterly changed his way of life and devoted all his labour to the perfect fulfilling of the demands of his faith. He decreed that churches be built throughout the land on the places where the idols had been pulled down, and himself built a beautiful church in Kiev to the most holy Mother of God. This church was built on the self-same spot where St Theodore and his son John (Vikings, 12/25 July) suffered martyrdom for Christ. With the same irresistible force with which Vladimir earlier upheld idolatry, he now spread Christianity. He entered into rest in the Lord in 1015.