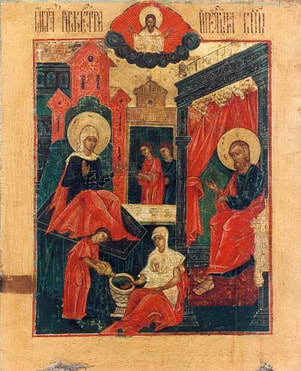 The Holy Virgin Mary was born of her aged parents, Joachim and Anna. Her father was of the tribe of David and her mother o the tribe of Aaron, and so she was of royal blood from her father and priestly blood from her mother. By this, she foreshadowed Him who would be born of her as King and High Priest. Her parents were already old and had no children, and, because of this, were ashamed before men and humble before God. In their humility, they prayed with tears that God would bring joy to their old age with the gift of a child, as He had once given joy to the aged Abraham and Sarah, giving them their son Isaac. God, almighty and all-seeing, gave them a joy far exceeding their expectations, and their wildest dreams, for He gave them not just a daughter, but the Mother of God; He illumined them not only with temporal joy but with eternal. God gave them just one daughter, who later gave them just one grandson – but what a daughter and what a grandson!
Mary full of grace, blessed among women, the temple of the Holy Spirit, altar of the living God. Table of living bread, ark of God’s holy things, tree of the most delicious fruits, glory of the human race, praise of womanhood, fount of virginity and purity – this was the daughter given by God to Joachim and Anna. Born in Nazareth, she was after three years taken to the Temple in Jerusalem whence she returned again to Nazareth and shortly afterwards heard the tiding  of the holy Archangel Gabriel concerning the birth of the Son of God, the Saviour of the world, from her most pure and virginal body.

On this day are commemorated two events connected with the Precious Cross of Christ: the first - the finding of the Cross on Golgotha and the second - the returning of the Cross to Jerusalem from Persia.

Staying in the Holy Land, the holy Empress Helena decided to look for the Precious Cross of the Lord. An old Jew called Judah was the only person who knew the whereabouts of the Cross, and, under pressure from the Empress, he revealed that the Cross was buried under the Temple of Venus that the Emperor Hadrian had built on Golgotha. The Empress ordered that this idolatrous temple be pulled down, and then, digging deep below it, she found three crosses. While the Empress was in uncertainty about how to recognise, which cross was the Lord’s, a funeral precession passed by. Then Patriarch Macarius told them to place the crosses one by one on the dead man. When they placed the first and second on him, the dead man remained unchanged, but when the placed the third on him he was restored to life. By this, they knew that this was the Precious and lie-giving Cross of Christ. After that, they placed it on a sick woman, and she recovered. Then the Patriarch raised the Cross aloft for all to see, and the people sang with tears: “Lord, have mercy!” The Empress Helena had a silver casing made, and placed the precious Cross in it.

Later, King Chozroes conquered Jerusalem, took the people into slavery and carried the Lord’s Cross off to Persia, where it remained for fourteen years, In 628, the Greek Emperor Heraclius was victorious over Chozroes and brought the Cross back to Jerusalem with great ceremony. Entering the city, Heraclius was carrying the Cross on his back, but suddenly the aged Emperor was unable to take another step. Patriarch Zacharias saw an angel directing the Emperor to take off his imperial robes and walk beneath the Cross along the way that Christ had walked, barefoot and humiliated as He had been. He passed this vision on to the Emperor, who stripped himself of his raiment and, in poor clothing and barefoot, took up the Cross, carried it to Golgotha and placed it in the Church of the Resurrection, to the joy and consolation of the whole Christian world.

They lived and suffered in Rome in the time of the Emperor Hadrian. The wise Sophia (as her name – Sophia – wisdom, indicates) was left a widow and, as a Christian, steeped herself and her daughters in the Christian faith.
At the time that Hadrian’s persecuting hand stretched out over the virtuous house of Sophia, Faith was twelve, Hope ten and Love nine. The four of them were brought before the Emperor, with their arms entwined “like a woven wreath”, humbly but firmly confessing their faith in Christ the Lord and refusing to offer sacrifice to the goddess Artemis. At the moment of their passion, the mother urged her valiant daughters to endure to the end: “Your heavenly Lover, Jesus Christ, is eternal health, inexpressible beauty and life eternal. When your bodies are slain by torture, He will clothe you in incorruption and the wounds on your bodies will shine in heaven like the stars”. The torturers inflicted harsh torture on Faith, Hope and Love one by one. They beat them, stabbed them and threw them into fire and boiling pitch, and finally beheaded them one after the other. Sophia took the dead bodies of her daughters out of the town and buried them, and stayed by their grave in prayer for three days and nights, then gave her soul to God, hastening to the heavenly company where the bless souls of her daughters awaited her.