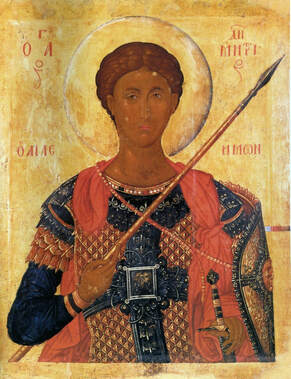 ​THE HOLY AND GREAT MARTYR DIMITRIOS
26 Oct/8 Nov
This glorious and wonderworking saint was born in the city of Salonica of well-born and devout parents. Begged of God by these childless parents, Dimitrios was their only son and was, because of this, most carefully cherished and educated. His father was the military commander of Salonica, and, when he died, the Emperor made Dimitrios commander in his place. In doing this, the Emperor Maximian, an opponent of Christ, particularly recommended him to persecute and exterminate the Christians in Salonica. Dimitrios not only disobeyed the Emperor: he openly confessed and preached Christ the Lord in the city. Hearing of this, the Emperor was furious with Dimitrios and, at one time, on his way back from a war against the Sarmathians, went to Salonica especially to look into the matter. The Emperor, therefore, summoned Dimitrios and questioned him about his faith. Dimitrios proclaimed openly before the Emperor that he was a Christian, and, furthermore, denounced the Emperor’s idolatry. The enraged Emperor cast him into prison. Knowing what was awaiting him, Dimitrios gave his goods to his faithful servant, Lupus, to give away to the poor, and went off to prison, glad that suffering for Christ was to be his lot. In the prison, an angel of the Lord appeared to him and said: “Peace be with thee, thou sufferer for Christ; be brave and strong!” After several days, the Emperor sent soldiers to the prison to kill Dimitrios. They came upon the saint of God at prayer, and ran him through with their spears. Christians secretly took his body and gave it burial, and there flowed from it a healing myrrh by which many of the sick were healed. A small church was very soon built over his relics. An Illyrian nobleman, Leontius, became sick of an incurable illness. He ran prayerfully up to the relics of St Dimitrios and was completely healed, and in gratitude built a much large church in place of the old one. The saint appeared to him on two occasions. When the Emperor Justinian wanted to take the saint’s relics from Salonica to Constantinople, a spark of fire leapt from the tomb and a voice was heard: “Leave them there, and don’t  touch!”, and thus the relics of St Dimitrios have remained for all time in Salonica. As the defender of Salonica, St Dimitrios has many times appeared and saved the city from calamity, and there is no way of counting his miracles. The Russians regarded St Dimitrios as the protector of Siberia, which was overcome and annexed by Russia on October 26th, 1581.

STS COSMAS AND DAMIAN
1/14 November
Unmercenaries and wonderworkers, they were brothers in the flesh and in the spirit, born in Asia Province (now Western Turkey) of a pagan father and a Christian mother. After their father’s death, their mother Theodota devoted all her time and energy to the bringing-up of her sons as true Christians. God helped her, and her sons grew as two choice fruits and as two holy lamps. They were skilled in medicine and ministered to the sick without payment, and so fulfilled Christ’s command: “Freely have ye received; freely give” (Matt. 10:8). They were so strict in their unpaid ministry to men that Cosmas became greatly аngered with his brother Damian when he took three eggs from a woman, Palladia, and gave orders that, after his death, he should not be buried with his brother. In fact, holy Damian had not taken those eggs as a reward for healing Palladia’s sickness, but because she had sworn by the Most Holy Trinity that he should have them. However, after their death in Fereman, they were buried together in obedience to a revelation from God. These two holy brothers were great wonderworkers both during their lifetime and after their death. A farm labourer, on lying down to sleep at one time, was attacked by a snake, which entwined itself around his mouth and stomach. This poor man would have breathed his last in the greatest torment had he not at the last moment invoked the help of Saints Cosmas and Damian. Thus, the Lord glorified forever by miracle those who glorified Him here on earth by their faith, purity and mercy.


THE HOLY ARCHANGEL MICHAEL AND ALL THE BODLILESS POWERS OF HEAVEN
8/21 November
The angels of God have been commemorated by men from the earliest times, but this commemoration often degenerated into the divinization of angels (IV Kings 23:5; A.V. II Kings). Heretics always wove fantasies round the angels. Some of them saw the angels as gods and others, if they did not so regard them, took them to be the creators of the whole visible world. The local Council in Laodicea, that was held in the fourth century, rejected in its 35th Canon the worship of angels as gods, and established the proper veneration of them. In the time of Pope Sylvester of Rome and the Alexandrian Patriarch Alexander, in the fourth century, this Feast of the Archangel Michael and the other heavenly powers was instituted, to be celebrated in November. The angels were the first created beings.  St Dionysius the Areopagite, a disciple of the Apostle Paul (that Apostle who was caught up to the third heaven), writes of these nine orders in his Book “Celestial Hierarchies”. These orders are as follows: six-winged Seraphim, many-eyed Cherubim, godly Thrones, Dominions, Virtues, Powers, Principalities, Archangels and Angels. The leader of the whole angelic army is the Archangel Michael. When Satan, Lucifer, fell away from God, and carried part of the angels with him to destruction, then Michael arose and cried to the unfallen angels: “Let us give heed! Let us stand aright; let us stand with fear!” and the whole angelic army sang aloud: “Holy, holy, holy Lord God of Sabbath; heaven and earth are full of Thy glory!” (see on the Archangel Michael: Joshua 5:13-15 and Jude v.9). Among the angels there rules a perfect unity of mind, of soul and of love; of total obedience of the lesser powers to the greater and of all to the holy will of God. Each nation has its guardian angel, as does each individual Christian. We must keep in mind that, whatever we do, openly or in secret, we do in the presence of our guardian angel and that, on the Day of Judgement, a great multitude of the holy angels of heaven will be gathered around the throne of Christ, and the thoughts, words and deeds of every man will be laid bare before them. May God have mercy on us and save us through the prayers of the holy Archangel Michael and all the bodiless powers of heaven.

(Adapted from “The Prologue from Ochrid”, Vol.4)