THE FEAST OF FEASTS – THE HOLY PASCHA OF THE LORD 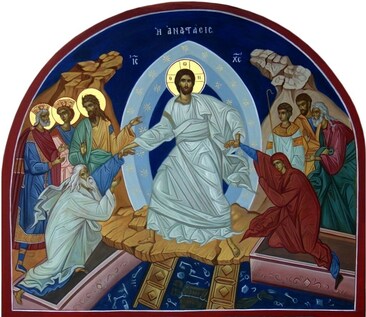 ​On Saturday, the day after the crucifixion of the Lord, His disciples and followers were filled with gloom, for they had seen their Lord and master die, crucified on a cross. As Holy Scripture tells us, there was a man named Joseph from the Jewish town of Arimathea. He was a member of the council, a good and righteous man, who had not consented to their purpose and deed, and he was looking for the kingdom of God. This man went to Pilate and asked for the body of Jesus (Luke 23:50-52). Pilate gave him leave. So he came and took away His body. [He and] Nicodemus also, who had at first come to Him by night… took the body of Jesus, and bound it in linen clothes…as is the burial custom of the Jews. Now in the place where He was crucified there was a garden, and in the garden a new tomb where no one had ever been laid. So because of the Jewish day of Preparation, as the tomb was close at hand, they laid Jesus there (John 19:38-42). The women who had come with Him from Galilee followed, and saw the tomb, and how His body was laid; then they returned and prepared spices and ointments. On the Sabbath they rested according to the commandment (Luke 23:55-56).

Next day, that is, after the day of preparation, the chief priests and the Pharisees gathered before Pilate and said, “Sir, we remember how that impostor said, while He was still alive, ’After three days I will rise again.’ Therefore order the sepulchre to be made secure until the third day, lest His disciples go and steal Him away, and tell the people, ’He has risen from the dead,’ and the last fraud will be worse than the first..” Pilate said to them, “Your have a guard of soldiers; go, make it as secure as you can.” So they went and made the sepulchre secure by sealing the stone and setting a guard (Matt. 27:62-66).

But on the first day of the week, at early dawn, [the women] went to the tomb, taking the spices which they had prepared (Luke 24:1). And behold, there was a great earthquake; for an angel of the Lord descended from heaven and came and rolled back the stone, and sat upon it. His appearance was like lightning, and his raiment white as snow. And for fear of him the guards trembled and became like dead men. But the angel said to the women, “Do not be afraid; for I know that you seek Jesus Who was crucified. He is not here; for He has risen, as He said. Come, see the place where he lay. Then go quickly and tell His disciples that He has risen from the dead (Matt. 28:2-7).

Mary Magdalene came to the tomb early, while it was still dark, and saw that the stone had been taken away from the tomb. So she ran, and went to Simon Peter and the other disciples, the one whom Jesus loved. And said to them, “They have taken the Lord out of the tomb, and we do not know where they have laid Him.” Peter then came out with the other disciples, and they went toward the tomb. They both ran, but the other disciples outran Peter and reached the tomb first; and stooping to look in, he saw the linen cloths lying there, but he did not go in. Then Simon Peter came, following him, and went into the tomb; he saw the linen cloths lying, and the napkin, which had been on His head, not lying with the linen cloths but rolled up in a place by itself. Then the other disciple, who reached the tomb first, also went in, and he saw and believed… Then the disciples went back to their homes.
But Mary stood weeping outside the tomb, and as she wept she stooped to look into the tomb; and she saw two angels in white, sitting where the body of Jesus had lain, one at the head and one at the feet. They said to her, “Woman, why are you weeping?” She said to them, “Because they have taken away my Lord, and I do not know where they have laid Him.” Saying this, she turned around and saw Jesus standing, but she did not know that it was Jesus. Jesus said to her, “Woman, why are you weeping? Whom do you seek?” Supposing Him to be the gardener, she said to Him: “Sir, if You have carried Him away, tell me where You have laid Him,, and I will take Him away.” Jesus said to her, “Mary.” She turned and said to Him in Hebrew, “Rabboni!” (which means Teacher). Jesus said to her, “Do not hold Me, for I have not yet ascended to the Father; but go to My brethren and say to them, I am ascending to My Father and your Father, to My God and your God.” Mary Magdalene went and said to the disciples, “I have seen the Lord; and she told them that He had said these things to her (John 20:1-8, 10-18).

Later the Risen Christ revealed Himself to the apostles in the Divine Glory of the Resurrection. And when they witnessed that glory, a new awareness of life was born within them along with the power of faith which moved them to new deeds in their apostolic service. It led them into a hostile world in which they were to endure suffering and which met their preaching of the Crucifixion and Resurrection of Christ with enmity and scorn. But we know that Christ’s apostles carried His holy message throughout the Greek and Roman world and into other lands, preaching Christ, how he had come into the world to save men and how, though Himself God, He had taken human flesh and lived as a man among men, and how, as a man, He had achieved incomprehensible perfection.

So, too, all true believers rejoice on this day of redemption by the great revelation of God’s truth and life eternal in Jesus Christ, our Redeemer. His glorious Resurrection is the foundation of our Christian Faith and Hope. It is the indestructible foundation on which the miraculous structure of Christ’s Church is built.

The Resurrection of Christ the Redeemer is the completion of the Great Work for the redemption of mankind from enslavement to Satan and corruption; the power of sin is destroyed and Death itself is abolished. The Resurrection of Christ grants every one the right to call himself a child of God; it is the return of Paradise lost, the threshold of the Holy of Holies of immortal life and communion with God. St.Paul tells us that if there had been no Resurrection then our Christian faith would have been deprived of any foundation or value: If Christ has not been raised, then our preaching is in vain and your faith is in vain… If Christ has not been raised, your faith is futile and you are still in our sins (1 Cor. 15:,17).

But Christ is risen; He rose the First among the sons of earth, and thus manifested His Might and His Divine Power. Through our forefather’s disobedience to God, sin took possession of human nature, and brought decay and death in its wake. But Christ abolished original sin and cleansed the fallen Adam (Eph. 1:7). With His divine blood He raises man into a new creation (1 Cor. 15:13-26).

The Holy Orthodox Church triumphs, exults and rejoices, magnifying and extolling Christ’s glorious Resurrection, the great and wonderful manifestation of Divine Love and Forgiveness and the beginning of everlasting life. On this Feast of Feast, this Triumph of Triumphs, the Holy Church exults in her love for her beloved Bridegroom, Who rose from the tomb for our salvation, and summons us, her faithful children, to this eternal Feast of angels and men. This greatest feast, illuminated by the light from on high, is a divine prefiguration of the general resurrection of all those who have died from the beginning of time. And this is so because, as the Paschal Hymn so triumphantly proclaims:
“Christ is risen from the dead, trampling down death by death, and upon those in the tombs bestowing life!”