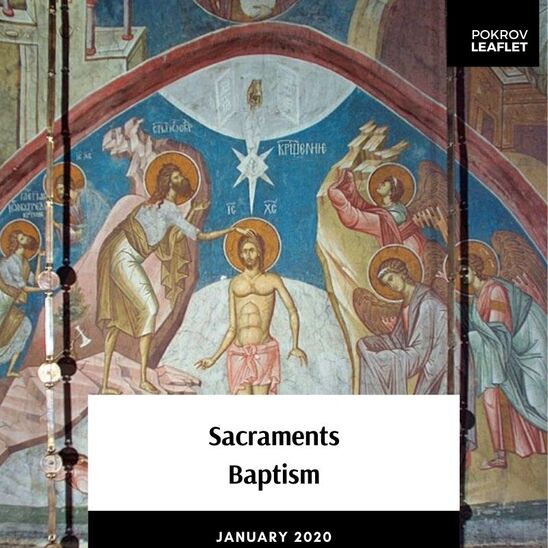 ‘Mysteries’, as they are referred to in the Eastern tradition, are events in the life of the Church-big and small-which show it to be the Church of the Holy Spirit, Who proceeds from the Father, through the Son. It is customary to speak of Seven Sacraments (Mysteries), although Fr Michael Pomazansky (author of ‘Orthodox Dogmatic Theology’) used to say that these are seven peaks in a whole mountain rage. In addition to Baptism, Chrysmation (Confirmation), the Eucharist, Repentance (Confession), Marriage, Holy Orders (the Priesthood) and Holy Unction (Healing service) here are some examples of the other ‘mountains’ in this range: Monastic tonsure, Blessings of water, Consecration of a temple (Church building), Funeral service and an abundance of other blessings and prayer services.

It is timely for us to begin this series in 2020 at the Feast of Theophany, the Baptism of Christ. Baptism is the door by which a person enters into the Church. Just as St. John the Forerunner began to baptise Israelites in the place at the Jordan where they crossed into the Promised Land after Moses (Bethabara, ‘the place of the ford’), so baptism brings us into the New Israel of Jesus Christ.

The first part of the Baptism service is called ‘the making of a Catechumen’. The early Church took this very seriously. Catechumens (those who were preparing for baptism) were trained in the Christian faith by studying the Creed and the Bible, to understand why we need salvation, who the Saviour Jesus Christ is, and what the Church is. This section of the service consists of prayers called ‘exorcisms’ because they are designed to prepare the person for grace. These prayers are followed by questions from the priest and responses of the person who is being baptised. Sponsors (‘Godparents’) respond on behalf of an infant. Then the Creed is recited as a solemn statement of our faith.

What follows is a sequence of two Mysteries – Baptism and Chrysmation.  As we know from the Acts of the Apostles (and other New Testament books), immersion in water (that is what ‘baptism’ means) was followed by the laying on of hands of the apostles or bishops to confer the gift of the Holy Spirit. We are born again by water and the Spirit (Jn. 3:5).
As the priest censes the font, two events are remembered: the creation of the world with the Spirit of God embracing the waters and the baptism of Jesus of Nazareth, the Christ, manifesting the Holy Trinity. In the practice of some of the Orthodox the priest here sings the hymn of Theophany: “When You were baptised in the Jordan, o Lord..” The service then proceeds with the Great Litany, petitions for the blessing of water and for the person to be baptised. A long prayer – borrowed in part for the Great Blessing of the waters at Theophany – ends with the triple blessing of water with oil, while Alleluia is sung. The same oil, which is a connection to the story of Noah and the Flood (the dove bearing an olive branch of peace), is used to anoint the infant or the adult. The priest then submerses the person three times to connect with the story of the Flood and the passage in Romans (St Paul) to enact our participation in the death and resurrection with Christ. We are buried then rise out of the water: “.. be dead indeed to sin, but alive to God in Jesus Christ our Lord” (Rom. 6:11).

Rising from the water the person is clothed with a ‘robe of righteousness’: (the baptismal gown), which represents the return of God’s grace lost at the forbidden tree. Christians no longer feel nakedness – spiritual vulnerability – as Adam and Eve did. We are clothed in Christ through the Holy Spirit. The sacrament of Chrysmation is administered with Holy Myrrh on the forehead, eyelids, nostrils, mouth, ears, chest, hands and feet. The ‘seal of the gift of the Holy Spirit’ seals the mind, the senses and the entire body and soul. The Priest leads the baptised person around the font while the words of St Paul are sung: “As many as have been baptised into Christ have put on Christ, Alleluia!” (Gal. 3:27). This is done in a circular processions three times in honour of the Holy Trinity, One God. The circle is an ancient symbol of God, having no beginning and no end. The circular procession is characteristic of other Mysteries as well.

The procession is followed by two readings: Romans 6:3-11 mentioned earlier and the last paragraph of Matthew’s Gospel where the Lord sends His apostles (lit. ‘ambassadors’, messengers) into the whole world to proclaim the Good News, to teach and to baptise in the name of the Father, and of the Son, and of the Holy Spirit. This is the first of the so-called Resurrection Gospel readings and we hear it at the Easter (Great) Saturday liturgy and several times during the year.

The last part of the service consists of number of prayers of blessing. The Holy Myrrh is wiped off with a moist sponge. The last rite is a dedication to God through the cruciform cutting of small amounts of hair. It is a symbolic offering by the person of part of himself or herself and the rite has deep Biblical roots.

Baptism as a washing in water is symbolic of purification from sin. It forms the foundation of a life of grace and repentance. It is also – and this is clear from one of the prayers – a grafting of a new branch of the sick tree of Adam onto the healthy Vine of Christ (Jn. 15: 1-8). We will say more about this in talking about other Mysteries, especially Repentance and Communion (Eucharist).