the second half of great lent and Pascha 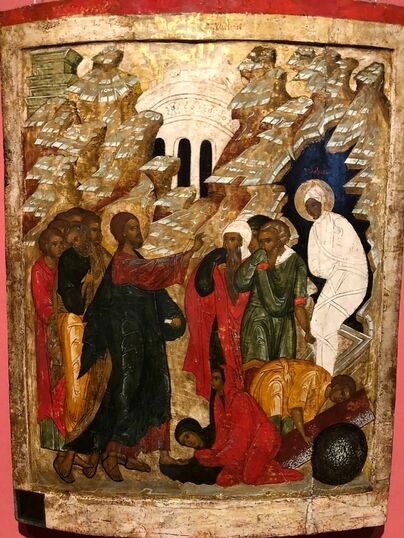 Because of Annunciation, this year’s fourth Sunday of Lent was very different in tone to the more subdued usual theme of St John of the Ladder. Annunciation is one of the twelve annual great feasts, which celebrates Archangel Gabriel’s appearance to Virgin Mary to announce to Her that She is chosen to be the Mother of God the Saviour. The topic of Christ’s conception from the Holy Spirit and the Virgin Mary is important in New Testament Scripture and theology. It is about God’s entry into the world as the Son of man. The Incarnation had to bring a New Adam in the sinless state of humanity that Old Adam had before the fall. Only then could He become our Saviour. For that to happen His conception had to be holy, i.e. without bringing in the chaotic forces of human desire, the passions.

Normally the fourth Sunday of Lent and the week that follows say much about the patristic teaching on prayer and fasting, i.e., the podvig of unseen warfare against the passions.  Since the late 600s AD the Church has sung the Great canon of St Andrew of Crete and read the life of St Mary of Egypt, who is also remembered on the fifth Sunday of Lent. The images of the Great canon of repentance and the life of St Mary help to bring even hardened hearts to contrition.
The service of the fifth Sunday remembers Christ’s parable of the rich man and Lazarus, which connects with the theme of the Lord’s last journey to Jerusalem to raise Lazarus, His friend. During the sixth week we follow the Lord and His disciples to Bethany where the great miracle occurs which creates much excitement among the people. Thousands throng to meet the Messiah as He comes down Mount of Olives, riding a donkey (rather than a stallion) as the King of peace, greeted with palm branches (symbol of resurrection) and shouts of “Hosannah, Son of David!” In vain do the cowardly leaders try to stop this outpouring of national joy. Christ proceeds to the Temple to purge it again from those who had made it into a market place. He begins His daily visits there to talk to the people and to defeat the feeble challenges of his adversaries, the self-righteous Pharisees and the Sadducees who did not believe in the resurrection.

In the depths of the Temple complex, the leaders now seriously conspire to kill Him. They realise that their power and influence may slip away if the people follow Christ. They are afraid of the Romans, their patrons, suspicious of any national movements. Yet Pontius Pilate, Procurator of Judea will understand that the King of Peace presents no threat to the power of Rome. His Kingdom
Is not of this world.

Services of Passion Week before Pascha reflect each day’s events as they unfold in the narrative of the Gospels, appointed for reading. The Church beholds the Bridegroom who comes in the middle of the night for the wedding feast. The bridal chamber is splendid, but I have no wedding garment to enter this feast, cries the contrite soul, unless God gives the robe of light.

Gospel events of Thursday night and Friday are so intense that the Church begins to contemplate them from Wednesday night. Here we have the Mystical Supper and lesson in humility when the Lord washes His disciples’ feet (Thursday morning); the twelve Passion Gospels read at matins served on Thursday night; Royal hours, vespers served at the time of Christ’s death on the Cross, followed by a burial service in the evening, ending with an Old Testament prophecy about the bones of the house of Israel, a hopeful expectation of the resurrection.

On Saturday morning, we serve a liturgy preceded by vespers with many readings from the Old Testament pointing to Christ and His victory over death. In the ancient times, great numbers of newly prepared catechumens were baptised during these readings and led into Church to participate in the liturgy and communion. This used to happen in the afternoon. Everyone then stayed in Church, fortifying themselves with bread and wine, sitting and listening to the reading of the entire book of Acts of the Apostles. Then the Paschal vigil would begin, lasting all night. Despite our spiritual and physical weakness, we still connect with the early Church in overcoming time and space, contemplating the mystery of salvation: Christ’s passion, death and resurrection.