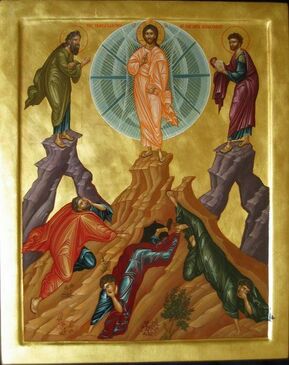 THE TRANSFIGURATION of our Lord and God and Saviour Jesus Christ
​
In the third year of His ministry, the Lord Jesus spoke more frequently to His disciples of His coming Passion, but linked it always with His glory after His suffering on the Cross. That His coming suffering should not utterly shatter His disciples, so that they fall away from Him, He, The all-Wise, decided to show them before His Passion something of His divine glory. He therefore, taking with Him Peter, James and John, went by night onto Mount Tabor and was there transfigured before them. “And His face shone as the sun, and His raiment became white as light”, and there appeared beside Him Moses and Elias, the great prophets of the Old Testament.  The disciples saw and were amazed, and Peter said: “Lord, it is good for us to be here; if Thou wilt, let us make here three tabernacles: one for Thee, one for Moses and one for Elias”. While Peter was still speaking, Moses and Elias disappeared and a bright cloud came and overshadowed the Lord and the disciples, and a voice came out of the cloud: “This is My beloved Son, in whom I am well pleased; hear ye Him”. Hearing this voice, the disciples fell prostrate on the ground as though dead, and remained thus lying in fear until the Lord came to them and said: “Arise, and be not afraid” (Matt. 17).
​
Why did the Lord take only three disciples with Him onto Tabor, and not all of them? Because Judas was not worthy to behold the divine glory of the Master whom he was to betray, and the Lord did not want to leave him alone at the foot of the mountain, that the betrayer should not thus work his betrayal.
Why was He transfigured on the mountain and not in the valley? That He might teach us two virtues: love of toil and pondering on God. To climb to the heights involves toil, and the heights represent the height of our thoughts: pondering on God.
Why was He transfigured at night? Because the night is more fitted to prayer and meditation than the day, and because the night covers all earthly beauty with darkness and reveals the beauty of the starry heavens.
Why did Moses and Elias appear? To shatter the Jewish fallacy that Christ was one of the prophets – Elias, Jeremiah or one of the others. This was why He revealed Himself as King over the prophets, and why Moses and Elias appeared as His servants. Up to this moment, the Lord had many times shown His divine power to His disciples, but on Tabor He showed them His divine nature. This vision of His divinity and the hearing of the heavenly witness to Him as the Son of God must have been of support to the disciples in the days of the Lord’s suffering, for the strengthening of a steadfast faith in Him and His final victory.

THE DORMITION of the Most Holy Mother of God
The Lord, Who on Sinai gave the Fifth Commandment: “Honour thy father and thy mother”, showed by His own example how one must reverence one’s parents. Hanging in agony on the Cross, He remembered His mother, and, indicating the Apostle John, said to her: “Woman, behold thy son!”, and to John: “Behold thy mother!” and, with this concern for His mother, He breathed his last. John had a home on Sion in Jerusalem, where he settled the Mother of God and left her to pass her remaining days on earth. By her prayers, her kindly advice, her meekness and patience, she was of immense help to her Son’s apostles.
She spent virtually the rest of her life in Jerusalem, often going round the places that reminded her of the great events and the great works associated with and performed by her Son. She especially visited Golgotha, Bethlehem and the Mount of Olives. Of her journeys farther afield, her visit to St Ignatius the God-Bearer is recorded, as are those to St Lazarus the Four-days-dead, Bishop of Cyprus; to the Holy Mountain, to which she gave her blessing; and her stay in Ephesus with John during a fierce persecution of Christians in Jerusalem. In old age, she often prayed to her Lord and God on the Mount of Olives, on the spot from which He ascended, to take her from this world.
One day, the Archangel Gabriel appeared to her and revealed that she would enter into rest in three days’ time, and the angel gave her a palm-branch to be carried in her funeral procession. She returned home with great joy, with the heartfelt hope that she would see Chris’s apostles once more in this life. The Lord fulfilled her desire and all the apostles, brought by angels and clouds, gathered at John’s house on Sion. It was with great joy that she saw the Holy apostles, and she encouraged, advised and upheld them, then peacefully gave her soul into God’s hands without the slightest physical pain or struggle. The apostles took the coffin containing her body, from which an aromatic fragrance arose, and, accompanied by many Christians, took it to the Garden of Gethsemane, to the grave of Sts Joachim and Anna. By God’s providence, they were hidden from the wicked Jews by a cloud. A Jewish priest, Antony, touched the coffin with his hand, intending to overturn it, but at that moment, an angel of God cut off both his hands. He cried out with the pain, begging the apostles’ help, and was healed in confessing his faith in the Lord Jesus Christ.
It was left to the Apostle Thomas, who was delayed, again by God’s providence, to reveal a new and glorious mystery about the holy Mother of God. He arrived on the third day, and desired to embrace the body of the holy and most pure. When the apostles opened her grave, he found only the winding-sheet – the body was not in the grave. That evening, she appeared to the apostles, surrounded by a multitude of angels, and said to them”
Rejoice; I will be with you always!”
It is not known exactly how old the Mother of God was at the time of her falling-asleep, but the prevailing belief is that she had reached the age of sixty.